The new book by local author Phil Blacksmith (Philip Smith) has just been released and, in these Woke times, might be expected to gather a bit of controversy. “Jesus and the Beanstalk and other stories for Atheists” is a mixed-genre collection united by an irreverent attitude towards religious belief.

“Some Christians may take offence at something that sustains them through life being attacked but they should realise religion is offensive to rational people. One lady got as far as the first four words of the title before getting offended and could not believe I questioned the very existence of Jesus Christ, son of God. The Bible is not a History book and the New Testament not a biography: many of the same incidents and motifs occur in the mythologies of other deities in the area, pre-dating the Jesus myth,” he explains.

Phil has lived for the last seven years in the village with second wife, Julie Rayne, who, as a former TV singing star, was also a public Christian and you have to wonder if they see eye-to-eye. “Well, I am 6ft2 and she is 4ft9 so, we don’t often see eye-to-eye,” he jokes.

Before “Jesus and the Beanstalk”, an earlier story collection was called “Through a Judas Window” and a forthcoming collection is “Lead Us Not” – all titles with a religious tone – so you may wonder if he is a sincere non-believer. “You can name something ironically,” he asserts, “After all, I am an Atheist and a republican but my sons are called Kirk and Rex.”

The book is available direct from the online bookshop of York Publishing Services. 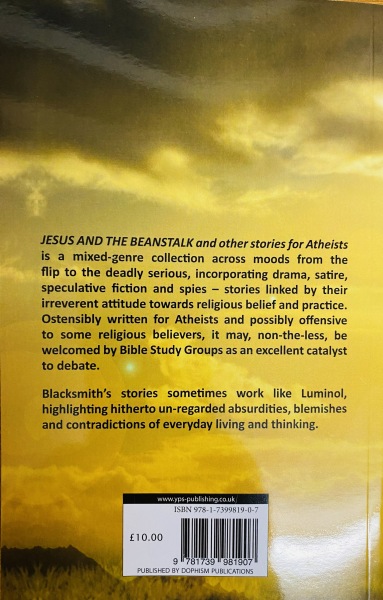