Second Lieutenant, 7 Battalion, attached 3 Battalion, Royal Fusiliers.
Killed in action, aged 23, between 24 and 29 April, 1915, during the Second Battle of Ypres.
He is commemorated on the Menin Gate Memorial to the Missing in Ypres.

I did not include Second Lt. Dunnington-Jefferson in my book, The Lost Men of Bishopthorpe, published in 2017, because I only became aware of his connection with Bishopthorpe in 2018. Prior to 2018, his name was not included on Bishopthorpe’s War Memorial. He and his family had moved away from the parish by the time of the First World War. As a result, there was nobody local to ask for his name to be added to the War Memorial. However, his place of birth was Middlethorpe, which had joined the ecclesiastical parish of Bishopthorpe in 1866. He was thus entitled to be remembered on the Bishopthorpe Parish Memorial.

Wilfrid Mervyn was the youngest son of Captain Mervyn Dunnington-Jefferson and his wife, Louisa Dorothy (formerly Barry). He was born at Middlethorpe Hall on 2 April, 1892. His father was a Justice of the Peace and became the first Chairman of Bishopthorpe Parish Council.
Wilfrid was educated at Radley College and later graduated with Honours from Christ Church, Oxford. He joined the legal profession and entered the Inner Temple in London in 1912. His father, Mervyn, died in the same year.
On the outbreak of the war Wilfrid volunteered immediately and joined 7 Battalion, Royal Fusiliers as a 2nd Lieutenant on 15 August, 1914. A period of training followed, but Wilfrid reached France on 11 April, 1915. He was temporarily attached to 3 Battalion, Royal Fusiliers which was serving in the Ypres Salient in Belgium. He joined them on 20 April just as the German Army launched a massive attack intending to capture the Salient and take Ypres. On 22 April, the Germans launched the first ever poison gas attack on the northern part of the Salient. All the Allied Forces in the area, including Wilfrid’s Battalion, which was in the line in the vicinity of Gravenstafel, were under considerable pressure and forced back in a fighting retreat. Sometime between 24 and 29 April, and just a few days after arriving in Belgium, Wilfrid was killed in action and, apparently buried where he fell. Some reports indicate that he was seriously wounded on 25 April and died the next day.

Wilfrid’s older brother, John, was an officer on the General Staff of the British Expeditionary Force. He managed to pay a visit to Wilfrid’s Battalion H.Q. just a few days after his brother died to find out about his brother’s last hours.

There is still a measure of uncertainty as to when and where Wilfrid died and particularly what happened to his body. Officially, the Commonwealth War Graves Commission (CWGC) records that he died on 27 April and is commemorated on the massive Menin Gate Memorial to the Missing in Ypres. His name can be found on Panel 8 of the memorial. The Menin Gate Memorial records the names of 54,595 men who died in the Ypres Salient up to and including 15 August, 1917 and who have no known grave.
However, among other details, CWGC also note that a wooden memorial cross to Wilfrid was in place at St. Julien Dressing Station Cemetery at some time during the war. This cemetery was not established until September, 1917, two and a half years after Wilfrid died and is some miles away from Gravenstafel where he fell. It passed into German hands in the Spring of 1918 and was badly damaged by shellfire in that summer.
St. Julien was finally retaken by the Belgian Army on 28 September that year, but there was no sign of Wilfrid’s wooden cross.

Wilfrid was posthumously awarded The British War and Victory Medals as well as the 1915 Star.

In carrying out the research for The Lost Men of Bishopthorpe, I found a number of men who were entitled to be remembered on our local memorial but for unknown reasons, were not commemorated there. Bishopthorpe Parish Council, in the person of their Chairman, Stewart Harrison, stepped up and agreed to have the memorial cleaned and add the names of these men. In October/November, 2018, eight names were added to the Memorial by Stonemasons Messrs. Burrows Davies Ltd. Wilfrid’s name was one of them. He is commemorated on a number of other memorials elsewhere in the country, but in particular, his details and photograph are included in the King’s Book of York Fallen Heroes, which is held in York Minster. 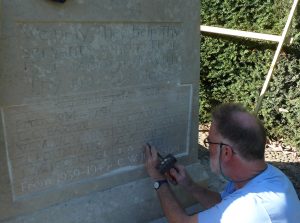 Adding the names to the memorial in 2018.