Users of the bishopthorpe.net email system (addresses like yourname@bishopthorpe.net) will find that they are currently unable to send or receive emails to/from their accounts. The hosting company suspended the service earlier today due to a large number of spam emails issued from one of the bishopthorpe.net addresses, probably due to lax security on the offending email account. Please be assured though that this does not mean the email system as a whole has been compromised. A single account is the cause of the problem, but the hosting company always invokes suspension of the entire system when problems occur.

At present we are working to restore access, and further status reports will be posted here when the situation has been resolved.

The email service has now been restored. If you experience further problems please get in touch via the ‘contact‘ page.
Please try to keep your email account secure by using a strong password, and changing it if you think it has become compromised.

The small butcher’s shop, with its pleasant blue and white painted frontage situated in the centre of Main Street, is a familiar Bishopthorpe landmark.  The butcher’s business, R. H. Dixon & Sons, has served the local community (including a number of Archbishops) for more than a century.  Many people still remember Mr. Geoff Dixon who had worked in the shop all his life and died in 2009 aged 95 years.

It is not well known, however, that the business was started by a young butcher, George Scholey who arrived in Bishopthorpe about 1869.  George was born in 1849 at Kelfield, the son of Robert Scholey, a farmer.  In 1873 he married his cousin, Annie, and brought her to his home, in Bishopthorpe.  The couple had eight children: six girls and two sons.  Unfortunately, the two sons and one of the girls died in infancy.

Among the local farmers who would have called upon George to slaughter their beasts for market, was Alfred Dixon.  Alfred tenanted Moor Farm in Moor Lane, Bishopthorpe.  He and his wife, Eliza, and two young children, arrived in Bishopthorpe from Barkston Ash during the 1870s.  No doubt the Scholey and Dixon families knew each other well and their children grew up together.  Almost inevitably, the eldest son of the Dixon family, Robert Henry, married Edith Annie, the eldest of the Scholey sisters.

The young couple married at St. Andrew’s Church in 1907.  Sadly, Annie’s father, George, had died only the previous year leaving Robert Henry to run his father-in-law’s butcher’s shop.  Robert lost his own father, Alfred, in 1892 and, with his younger brother, Percy, helped their mother, Eliza, to run Moor Farm.  Percy, who was born in Bishopthorpe in 1881, continued to run the farm well into the twentieth-century.

Robert Henry and Edith Annie Dixon settled into George Scholey’s large house, known as Walnut House, situated in the grounds next to the butcher’s shop.  The couple had two sons, Arthur and Geoffrey; both boys having been given the middle name of Scholey.  The two brothers followed in their relatives’ footsteps and became butchers.  Geoffrey did not marry, but Arthur married Hilda Agnes Sandberg in 1942 and it is their son, Robert, who to this day, continues to provide the village with excellent fare.

Bishopthorpe Local History Group is grateful to Mr. Robert Dixon for giving his permission to scan and display family photographs.

Rina Siyengwa is a Sociology PhD student at the University of York, and has contacted Bishopthorpe.net to help publicise a survey she is running around pollution and pollution monitoring.

The survey is aimed at all York residents and is designed to get an understanding of residents’ attitude to monitoring pollution and access to pollution information.

If you’d like to help by completing the survey, please click the link below to start. All replies are confidential and you do not need to provide any personal information. 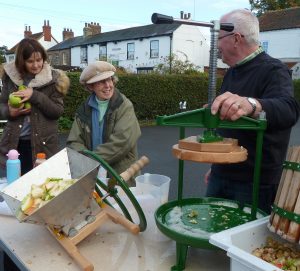 On Sunday, 9th October, villagers from Bishopthorpe joined the nation in celebrating the great British apple!  Throughout the land, apples were gathered from gardens and orchards for a mass apple pressing experience.

Link editor, Carole Green, seen left, organised the Bishopthorpe event which started with her team helping to pick apples of all varieties.  By Sunday afternoon, the Village Hall forecourt was a sea of green and red fruit.  Volunteers washed and chopped apples and piled them into the press.  Strong men turned the wheel and we all watched as the amber-coloured liquid trickled out to be collected in jugs.

Villagers arrived throughout the afternoon with yet more apples and all were rewarded with pints of delicious fresh apple juice.

Thanks are due to Carole and all volunteers who made the occasion a very pleasant community event. 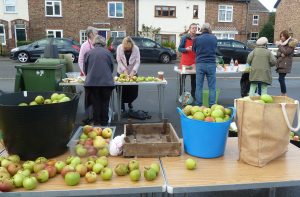 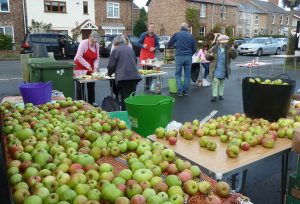 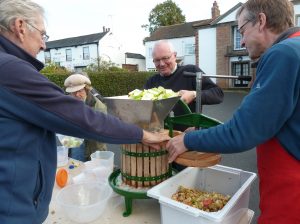 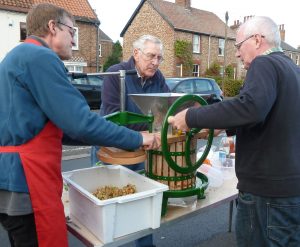 On Saturday 22nd October the 5:15’s are playing live in the Club. Top York covers band playing Mod, 60’s, Two-Tone, and Reggae. Get to the Club and get dancing. Doors open at 19.30. FREE ENTRY, ALL WELCOME.

The 5:15’s faithfully play Modernist anthems from the 60’s through each revival. Top musicians with a desire to make each gig special promise you a cracking night. Think Weller meets Entwistle and Moon accompanied by Rod the Mod who brought his mate Woody and you’ve just about got the picture.