This striking First World War memorial, situated near to Sledmere House on the Yorkshire Wolds, tells the story of the pole wagon drivers who signed up to Sir Mark Sykes’s Wagoners’ Special Reserve. 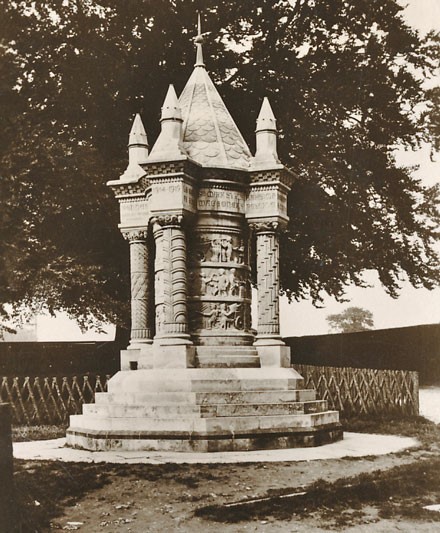 “The Wagoners’ Memorial, Sledmere: A Sense of Place”

The Parish Council is not political but comprised of Bishopthorpe residents who are doing their best to maintain and improve our village.  If you are interested, why not come along to our Parish Council meeting on 24 March and discuss with the current councillors what the Parish Council does?

Then, if you would like to join us submit your nomination for the forthcoming election before 4pm on 9th April 2015 to the City of York Council Electoral Services Manager.

For further advice see the City of York webpage, contact any current councillor, or drop a note into the letter box on the Village Hall.

I am writing this article in early February and have just read that City of York Council are putting forward a proposal to build six bungalows on three sites in Maple Avenue in Bishopthorpe.  The proposal includes the suggestion that Vernon House may be demolished to make way for 2 bungalows with a further 2 on the land currently used for parking opposite Vernon House and a final 2 on land at the junction of Maple Avenue and Beech Avenue.

As you are probably aware Vernon House was closed in early December by York Council due to health and safety concerns and it has now been established that the building will require significant investment before it could be re-opened for public use.  However, Vernon House is well used, mainly by the elderly in the village, for various clubs, societies and get-togethers.  During the current closure some of these activities have been put on hold until the expected re-opening of Vernon House as other venues are unavailable.

There was to be a meeting of the City Council on Tuesday 10 February about the development of these 6 bungalows along with a further 40 houses in York.  The Council’s cabinet is to be asked to agree to spending £25,000 on a feasibility study of the sites and this will include community consultation and necessary preparatory work.

It was pleasing to note that the City Council has already recognised the importance of Vernon House to the residents of Bishopthorpe as their current communication and consultation strategy includes community involvement and it is expected that there will be a public meeting to review the proposed plans with the right to agree, put forward amendments or object to the whole or part of the proposal.

It is accepted that further housing is needed in York but surely not at the expense of valuable assets such as Vernon House.

The next Parish Council meeting will be held on 24 March in the upstairs room of the Village Hall and all residents are welcome between 7:00 and 7:15 to put any questions or queries to the council.