Bishopthorpe Sports and Social Club will be holding its 3rd Annual St Patricks Day Beer Festival on the weekend of March 15th and 16th. 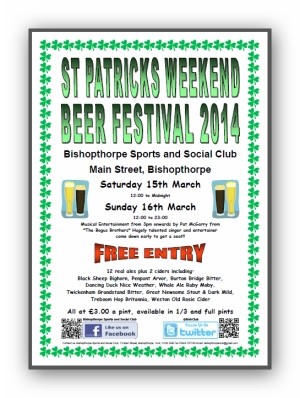 The Festival starts at 12 noon on the Saturday until midnight, with all the days sporting action on the TVs and big screen. The Club is proud to announce that for the second year running it has won the CAMRA York branch Club of the Year, and representatives from CAMRA will be making a presentation on the Saturday afternoon.

Sunday once again starts at midday, with musical entertainment from 3pm by Pat McGarry of Bogus Brothers fame. Get down early for a seat to see this popular performer.

For further information you can email the Club on bishopthorpeclub@gmail.com or telephone 01904 707185.

We have all been exercised about the weather in recent months – and why wouldn’t we be? Heavy rain, floods and strong winds have taken their toll and the press avidly report the terrible consequences. However, nothing is new, as 19th century newspapers illustrate. They provide a glimpse into the lives of our local predecessors who experienced many frightening and damaging storms.

On Monday, 7 January 1839, for example, the intense cold heralded snow, rain and wind which, during the night, blew into “a perfect hurricane”. The citizens of York rose early and witnessed a scene of destruction: tiles, slates, chimneys, spars, bricks, glass and spouts flew about the streets. The Minster sustained much damage; slates were blown from the north transept which almost uncovered the roof; and glass was lost from the Five Sisters window. To go out was physically dangerous but those who did crouched down and kept close to the sides of the buildings. An eight-year-old boy lost his life in St. Andrewgate when the roof collapsed onto his bed and a two-year-old boy was crushed to death at his home in Walmgate.

There was no loss of life in Bishopthorpe but the Palace grounds were reported to be a scene of desolation “difficult to describe”. The magnificent avenue of lime trees was badly damaged; a superb Huntingdon willow at the head of the fish pond was destroyed (“said to be the finest in the kingdom”); and many lofty trees including majestic elms and a larch were left with their roots in the air. The Palace itself was spared too much damage, but the bell turret on the gateway was hurled down and shattered. The village suffered lightly in comparison with the exception of the Archbishop’s hay shed; the circular pillars supporting it had “shivered to pieces”.

Just a few months earlier in September 1838 a terrific thunderstorm had shaken the neighbourhood. On that occasion, the atmosphere was sultry and close. The storm was so fierce that the horses pulling the mail coach near Tadcaster took fright causing the vehicle to swerve and overturn. A few minutes later, and within a hundred yards, a similar incident occurred with a stage coach full of passengers on its way to York. Fortunately no one was badly injured. Meanwhile, at Bishopthorpe, lightning struck the house of Mr. Horner, penetrating the roof, breaking windows, and singeing the hair of his child.

On an unseasonably cold Whit Monday in 1860, the livelihoods of many farmers and market gardeners were badly affected following a dreadful hurricane. Orchards in full bloom were stripped and vegetable crops ruined; recently clipped sheep were lost because of the piercing cold. Once again in Bishopthorpe, elm, birch and fir trees were levelled to the ground taking younger growth with them. The road to York became impassable while Mr. Smallwood’s plantation by the hauling path next to the Palace was “annihilated”.

These are just some examples of the high winds and storms that affected Victorian Bishopthorpe and York. Violent weather conditions, as reported in the weekly provincial newspapers, reveal appalling circumstances from which it must have taken a long time to recover. And remember – they did not have the ‘benefit’ of severe weather warnings and forecasts!