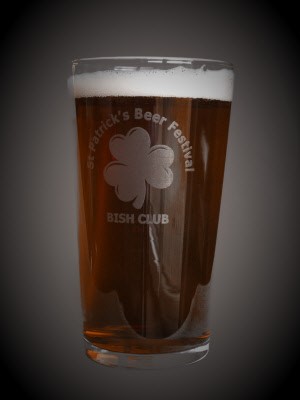 Rugby on the big screen (and England winning), a pile of pork pies and sandwiches to hand, and 10 real ales in prime condition waiting to be ‘tasted’.

The first St Patrick’s Day Beer Festival at Bishopthopre Sports and Social Club certainly had everything in place, with an excellent range of beers, a couple of ‘proper’ Czech lagers, and even an unusual Welsh cider.

So it’s a shame the day wasn’t better supported by the thirsty punters of Bishopthorpe; maybe there was too much else going on that day, or maybe too few people had heard the call to the bar, but those that made it to the club had themselves a real treat.

It would be unfair to pick a ‘best beer’ of the festival as one’s critical faculties tend to mellow a little as the day goes on, but certainly worthy of special mention were the Jaipur India Pale Ale from Thornbridge Brewery, and the Kettle Drum from Treboom, York’s newest microbrewery.

I didn’t get as far as the lagers and the cider (I know when to call it a day) but I think I sampled all the rest and have to say there wasn’t one not to like in the whole range.

So well done to Bishopthorpe Club, the brewers, the organisers and the volunteers who helped make it all happen. Let’s hope enough people enjoyed the day to convince the organisers to make it an annual event – I’m already looking forward to it, and this time we’ll bring a few more friends down with us!