Following last years heavy defeat the Parish Council were out for revenge in the second annual darts match with the Ebor Players as ‘sporting’ rivalry resumed for 2010. 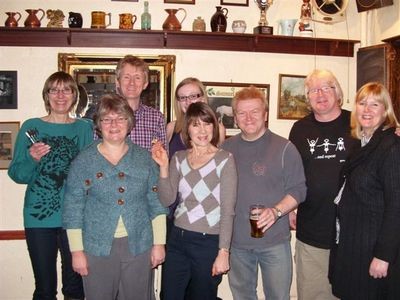 First match up was the ladies doubles which after a closely fought match was narrowly edged by the Ebor Players represented by Diane Curran who finished with a three dart check out & her daughter Jo against Jo Bewley & Cayley Godfrey. Bewley being very unlucky with her final dart bouncing out of the 5 needed to win.

The next match, the mens doubles was a much more one sided affair with Tom Davis & newcomer Paddy Thornton always having the better of Tim Bruce and gender bender Christine Higgins, a ‘man’ for the night due to a shortage of the latter on the Ebor Players team. Honours even 1.1

Next up was mixed doubles with the Ebor Players represented as last year by David ‘the steelman’ Rose and Bev Linfoot. They continued their winning ways and narrowly edged a close contest with Stewart Harrison & Catherine Bruce.

Now we were into the singles with Lisa Thornton (Parish Council) and Julia Sykes (Ebor Players) both coming into this match with unbeaten records, something would have to give and it was Thornton who emerged victorious to make the overall match score even again at 2.2

Men’s singles newcomer Steve ‘the boatman’ Poulter easily defeated Andrew ‘the scientist’ Dunn meaning that Ian Jemison from the Parish Council had to defeat Ebor Players captain Liam Godfrey to keep the match alive. Jemison duly obliged leaving Godfrey with a 0-2 record, his place must be in jeopardy for next year.

So with the scores tied at 3.3 the decider was a mixed doubles between Poulter & Diane Curran & Sandra MacDonald & Chris Dale for the Parish Council. The match ebbed and flowed in true tie-breaker fashion until finally ‘the boatman’ prevailed to claim his second victory of the evening.

Victory for the Ebor Players by the narrowest of margins by 4 matches to 3.

Thanks must go to Ros Kerr for donating a trophy and getting it engraved, to the Ebor Inn for their hospitality and to all who agreed to take part from the Parish Council & Ebor Players