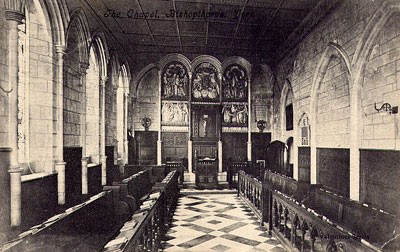 In 1693, Archbishop John Sharp (1691-1714) began to write in a large book an account of the estates and revenues of the Archbishop of York.  On the last page, he compiled an inventory of the effects that belonged in the Palace Chapel.  He wrote that it was, “An Account of goods, which I Recd. And which are always to go along with the Archbishop of York”.  The latter part of this statement was, unfortunately, over-optimistic. John Sharp’s successor, Sir William Dawes (1714-1724), hardly had time to settle in at the Palace when his housekeeper, Mrs. Elizabeth Newton, “embezzled” a number of items.  A note to this effect was added to some of the articles within the list.

The parish registers of Bishopthorpe reveal that the light-fingered Mrs. Newton was married to Thomas Newton, a coachman from London and, in 1715, they had a child christened in St. Andrew’s church.  No subsequent events were recorded so, perhaps, the couple returned hotfoot to the capital with their booty!

In spite of this regrettable episode, Archbishop Sharp’s inventory gives a colourful image of the Chapel interior in the late seventeenth and early eighteenth centuries.  The following is a transcription; comments added to the account at a later date are given in square brackets.

In the Chappel at Bishop’s thorpe

Communion Plate all gilt.  A large Basin, a Chalice & Cover, A Patten, with Cases to them all. [an Ewer int-nd-d by the ArchBp & given by Sr Darcy Dawes.]

A large piece of Tapestry at the Altar, of Ananias & Sapphira &c.

A Purple Damask Covering, fring’d with Gold, for the Communion Table both lower and upper part, a Cushion and two Stools, of the same.

A Turkey work’d Carpet, on the floor within the Rails.

A Dammask Linnen Cloth & Napkin, for the Communion.

Two Crimson stuff Curtains & two Cushions of ye same, one of Crimson Damask to lay the Common prayer book upon, the other to kneel on, in the Throne.  A Bass Vallens & 2 Curtain Rods.

A Cushion to sit on.

For the Pulpit, A Purple Damask Cushion, with deep Gold fringe & Tassels.  A Bass.

Seven prayer books in Folio, 2 of them large paper.  Six in quarto, besides the Chappel Clerk’s, eight in Octavo.  Most of them old & pretty much worne.  Three Douzen of Large Basses, a douzen & half of smaller.

Much has been altered in the Chapel over the years and the listed property would have become worn, faded and not always replaced.  The pulpit and throne mentioned above, for example, were removed following major restoration in 1892.  Despite this – and Mrs. Newton – we are rewarded with John Sharp’s detailed account which provides an insight into the lavish world of York’s eighteenth-century Archbishops.

Filleted:               Plain lines impressed on leather binding and, in the above examples, filled with gold.

Turkey carpet:     A carpet manufactured in or imported from Turkey, or of a style in imitation of this.  It was made in one piece of richly-coloured wools, without imitative pattern and, having a deep pile, cut so as to resemble velvet.