“The tumult and the shouting dies,
The captains and the kings depart….”

On Monday 24th July 2000, I was the last of the Pageant organisers on site at Bishopthorpe Palace. The previous day, many of the participants had turned up and cleared almost everything away, but the toilets, caravans, rubbish bins and generators had to wait for Monday collection.

For me there were feelings of pride at our success, relief at our avoidance  of disaster and pleasure in new friendships made.

So much had been done by so many people from Bishopthorpe and Acaster over the preceding year. A grant from the Millennium Fund had been secured, use of the Palace and its grounds generously granted by our Archbishop David Hope, the script written, the parts cast, many and frequent rehearsals held. Individuals and businesses kindly loaned their equipment, their animals and their services. We had identified suppliers and contractors for insurance, security, tent, stands, bar, toilets, etc. Licences had been obtained for the use of animals, children, toilets, explosives…

There were, of course, unanticipated problems to overcome. Some were quite major such as the need for access through Chantry Lane construction works. Others are trivial in retrospect but important at the time such as my (it can now be revealed) locking out the Home Guard between scenes. (Surely their predecessors would have learned to climb over fences!) Even the last job was not destined to be easy. A generator was too heavy to be towed out of the sunken garden. A tipper truck from Chantry Lane came to our rescue.

The week itself was a triumph. The sun shone. After the first night we had full houses. The performances went well. About a thousand local people enjoyed an event in which about two hundred friends and family participated.  Over £17,000 was raised for the villages.

I remember David Hope’s warm acceptance of our presence at the Palace, his willingness to allow us free access to the ground floor rooms and the ‘stable’ facilities and his very effective prayers for fine weather on each performance. Unfortunately the spell wore off a few weeks later when floods after torrential rain filled the Palace cellars!

I remember the humour and dedication shown by all the participants in the enterprise:  actors, stage crews, costume designers, choreographers, and front of house alike.

I directed three of the episodes in the production. I was especially grateful for the help of the Manager at Murton who provided the costumes for the Roman soldiers and drilled them, marching to the chant of “sin-dek’ (Sinister! Dexter Left Right). My second scene was a 16th century scene involved a dancing routine featuring the Volta and a pavane  which were coached by Sandra Smith and executed delightfully by the actors. I also loved the expressions of the maids who were peeping through a window of the Palace to watch the ‘toffs’ dancing.

My third episode featured a performance by our previous vicar. It was based on the flood of 1892. and John Bettridge designed an ingenious  boat constructed over his own trailer so it could be wheeled over the imaginary flood water to enable the Rev John Keble and two church wardens to disembark up the Palace steps. Several weeks later they would have needed a real boat!

The Millennium Pageant was certainly a wonderful occasion which enabled the whole village to come together and co-operate in so many ways. Fortunately the performance was professionally filmed so we  still have the video to bring it back to life. My thanks to everyone involved.

My involvement in the pageant started when a note dropped through our letter box inviting people in the village to help in various ways. I had recently set up a workshop in our barn with some woodworking machinery and I replied to say that I could probably help make some props and scenery. A reply arrived to say that before volunteering I should be aware of the list of props required – this included: 15 Roman soldiers’ uniforms complete with shields and swords; an assortment of staves; a large medieval chair (or throne); a Roman altar (portable); an effigy of an archbishop; 100 flaming torches; ways to simulate explosions (off stage); Army Bren guns and rifles for the Home Guard scene; and – particularly challenging – a boat to hold 3 people which could move across the tarmac in front of the palace.

It was clear that we would need a team of people to tackle these projects, so we got together a group of 6 enthusiasts with appropriate skills including John Lynch (builder) and Lin Taylor who had lots of relevant artistic skills. We had many meetings at our house to plan our work and do the research – for example, none of us had any idea what a portable Roman altar looked like – and the internet was not as widely used as it is today.

Making the boat was a challenge. Thankfully, Ian Jemison (Jemison Engineering) who lives very close to the palace, came to our rescue by making a metal front end (complete with wheel) to be joined on to my old wooden car trailer; this provided an excellent base on which a pretend wooden boat could be built. All this took time and my wife and I remember finishing the woodwork on the boat and painting it just a few hours before the dress rehearsal! 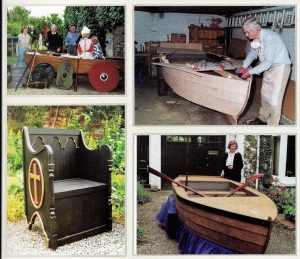 Luckily, we found a professional company which could supply the Roman soldiers’ uniforms and the flaming torches for the procession. A local military museum lent us the Army Bren guns and rifles. We set up a store for all the props and equipment in the Palace basement but looking after the guns and rifles was more of a challenge. We imagined the headlines in the press if some had gone missing – perhaps “arms cache in Archbishop of York’s palace raided”, so I found myself (with a helper) walking home after performances to store them in our house. A few neighbours were somewhat surprised to see guns on the streets of Bishopthorpe late at night.

Working as a props team turned out to be not only rewarding and good fun but also a way of making new friends. It showed us the value of having a community project which was sufficiently challenging to bring us together to work as a team.

Postscript. When Bishopthorpe Main Street was flooded a few months after the pageant, I remember a neighbour standing in about 3 feet of water, calling out to me “have you still got your boat?”

Could this be the last surviving bottle of Pageant Ale? Did you try it? When did you drink your last bottle?

There are more personal pageant memories in the public Comments section of this article.

If you don’t currently see these comments then Click Here to view the full article including the comments at the bottom of the article.

The memories and comments on this page show some individuals’  experiences of the Pageant and its aftermath. Many others took part in and enjoyed that week in 2000. I hope the recollections published here will provide for posterity some flavour not simply of what happened but of how village life was affected. You are still welcome at any time to add your comments, to help complete the picture.

One important fact still needs to be emphasised. Our Director, Andrew Dunn, worked almost full time on the project for months, helped and supported throughout by his wife, Romy. Sadly, Andrew is no longer with us, but it is to him that we should dedicate these reminiscences. Thank you, Andrew!

P.S. when the Village Hall re-opens, any written memories of the event can be handed in to the Bishopthorpe Community Archive.  We also have the facility to record memories for the Archive if anyone wishes to contact us through historygroup@bishopthorpe.net