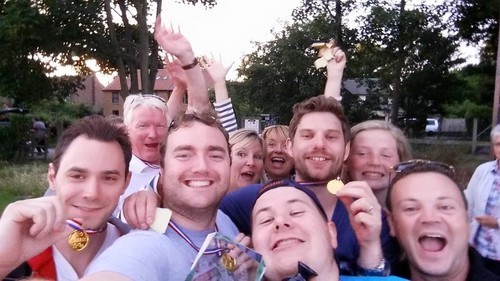 On a beautiful summers evening (yes they do exist) the Ebor Players were set a record score of 101 to chase in this the 10th instalment of the annual cricket match against a Village Select XI.

Village Select captain Michael Dale won the toss and elected to bat. History is against those batting first with 6 of the previous 9 encounters being won by the team batting second.  Opening for the Village were debutants Linda Welch and Mark Askew. Unfortunately it was to be no beginners luck for Welch as 2 balls later she was heading for the pavilion (bowled Rose) for a well earned drink. Askew was made of sterner stuff surviving all the Players could throw at him retiring unbeaten on 12.

Next up was Lisa Thornton who again made a personal best equalling 3 before edging a ball off Pickering to wicket keeper Dunn. Joining her at the crease was captain Mike Dale who retired on 13 but failed to get a finishing 6 as the ball dropped agonisingly close to the boundary, this would prove to be significant. It also took his aggregate score to 1 behind the overall leader Stewart Harrison who was yet to bat and curiously Dale had chosen to put him late in the order, was he putting personal vanity ahead of the team?

Debutants Tim Taylor and Clare Pitchford were next in and neither troubled the scorer both being caught out by Dunn & Hughes off the bowling of Curran & Linfoot respectively. Next up were Ben Jemison who made a solid 7 before being caught Curran off the bowling of Beadle and Nigel Pendleton an Ebor Player playing for the Village side who made a more pedestrian 7 before being caught Dunn (his third of the night) off the bowling of Schofield. We were now down to the tail and would it wag? Well there was a distinct lack of wagging from Chris Gajewizc as she batted for 18 balls (a record) without scoring before Schofield bowled her. Next up was aggregate run record scorer Stewart Harrison who made a late appearance to keep his 100% record intact but with the overs running out would it be too late? A quick-fire unbeaten 10 kept his record intact as he now has 91 runs scored across all matches, but his retirement meant a rapid rule change was required to allow last man standing Jo Bewley to bat on her own. This she duly did making 7. With extras contributing a whopping 42 the Village team had scored a record 100.

An excellent opening partnership from David Rose unbeaten on 13 and Tracey Patrick a career best 10 (who needs the more talented Patrick?) set a solid base for the Players but then a succession of quick wickets for the Village saw Hughes, from an excellent running catch taken by Jemison, Holloway & Pickering fall for low scores, swinging the balance in favour of the Village side again. But there was more to come from the Players as their middle order flourished. First Ned Curran continued his heroics from last year with an unbeaten 10 then captain Dunn contributed an unbeaten 12. Whilst scoring at one end, Dunn was ably supported by Bev Linfoot who broke the earlier set record by Gajewizc of number of balls faced without scoring a run – 21 in this case. Those of you familiar with 1980’s cricket will remember the legendary Chris Tavare, Linfoot’s effort made Tavare look like Kevin Pietersen.

Whilst Linfoot was occupying the crease the score was creeping along but the Players were beginning to run out of batsmen. Matt Taylor joined the fray scoring steadily, and was joined by Alex Schofield after Linfoot was finally removed off the bowling of Dale who was becoming a bit desperate as he saw his sides record total slowly being reeled in. With Taylor now assuming the passive role, Schofield hit 2 boundaries to edge the score ever closer. He was on 9 with only 1 batsman due in, 6 needed to win and he duly obliged with a well struck 6 to get the Players the 101 needed and victory with an over to spare.

So victory to the Ebor Players to tie the overall series 5.5 and at the presentation one of their band was heard to say ‘I’ve never won a sporting medal before’ not sure this counted as a sporting occasion but the sentiment was right.

A big thank you must go to Bishopthorpe Cricket Club for allowing us to use their facilities and good luck to them as they chase trophies across a number of fronts.

Village Select won the toss and elected to bat.

Did not bat; C Beadle