On the 6th July, Stage 2 of Le Grand Depart (the Tour de France) sets off from York and will, no doubt, flood the city with cyclists. I guess this means that Bishopthorpe will also have its fair share of pedalling visitors taking a break from the cycle path. This set me thinking that the York to Selby Cycle Path has its own story, much of which can be found in collections held at the Bishopthorpe Community Archive upstairs in the Village Hall. An interesting display will be shown in Bishopthorpe Library from 27 June to 14 July.

The former York to Selby East Coast Main Line, which skirted Bishopthorpe, was closed to passenger traffic in September 1983.   This was a sad day for many local residents who fondly remember steam giants such as Mallard and Flying Scotsman streak under the Appleton Road Bridge. A diversion to the west was opened to bypass the Selby coalfield. Anticipated settlement on the original route would have precluded high speed running. Sustrans Ltd., a registered charity which builds cycle routes, bought the section running from the north of Riccall to London Bridge at Tadcaster Road. Work started on converting the line into a traffic-free route for pedestrians and cyclists in the summer of 1985. 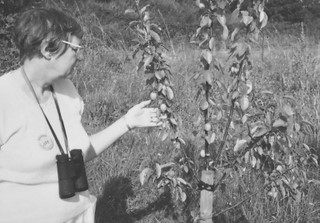 An Open Day was held at the Village Hall in Bishopthorpe to inform local people about the scheme. Sustrans was then able to set up a network of badge-wearing volunteers to help maintain and promote the path. Volunteers also helped to plant shrubs and trees on the embankments and a ferreter was taken on to keep down the rabbits and other vermin.   The late Bishopthorpe residents, Reg and Barbara Suffield, stepped forward and became much involved in the project. Reg became the official photographer and, using black and white 35mm film, created a record of the works showing how the project developed. The couple also spent time walking the path throughout the seasons noting the wild flowers and birds, some of which have since become scarce.

On 28 November 1987, former World Cycle Pursuit Champion, Beryl Burton, officially opened the main section by, naturally, taking a bike ride along the new route.   The section from Bishopthorpe to the centre of York was not completed until 1988.

Children from the Archbishop of York’s School take a break on the cycle path on Naburn Swing Bridge in 1989.  Copyright: Cath Ostle

In 1999, an exciting new venture was planned. A 10km scale model of the solar system was constructed and positioned on the cycle path. The ‘sun’ was eight feet in diameter and made from a septic tank! Adam Hart-Davis, the BBC presenter, was invited to officially open the solar system. Each planet was declared ‘open’ in turn by guests including Sir Donald Barron. They were ably assisted by children from the Archbishop of York’s School. With so much to see along the path – and not forgetting the fisherman forever catching a famous locomotive off Naburn Swing Bridge – no wonder the cycle path remains popular and will attract many new visitors this summer.