The sun shone and the village buzzed with activity last weekend.  The Junior School’s second Scarecrow Festival was a great success with numerous visitors and villagers thoroughly enjoying themselves meeting a variety of excellent scarecrows.

There were 77 scarecrows in all, spread throughout the parish.  Mums, dads, grandparents and children biked, walked and scootered round the village, many following one or more of the quiz-based trails prepared by the school.  Some people claimed to have seen them all, but it took both days to achieve this!  Everyone agreed that it had been a great community effort and loads of fun.

Here is a selection of just a few of the many fabulous scarecrows. 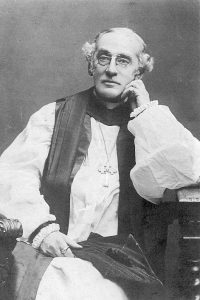 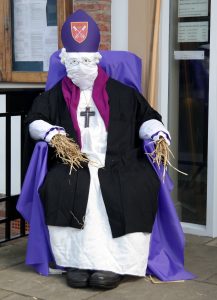 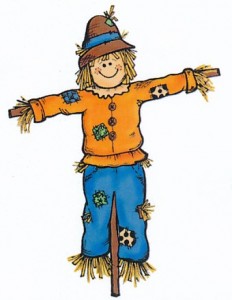 Following months of preparation and hard work, the Bishopthorpe Junior School Scarecrow Festival is upon us!  Many families, groups, local societies and businesses have been busy making scarecrows of various character to display outside their homes or shops.

There will be a great festive atmosphere and loads of fun to be found at the Junior School.  Not only will scarecrows be on show, there will also be a bouncy slide, games, face painting, and refreshments.

To guide you round the village to view the scarecrows, the School has prepared 3 trails of varying length.  The trails, which include quizzes, cost £2 each and will be on sale at the school. All proceeds made at this event will go towards the creation of a new outdoor reflection zone at the school.

We see stained glass in our cathedrals, churches, pubs and homes, but how much do we know about it?  At the next open meeting organised by the Bishopthorpe Local History Group, Master Glazier, Ian Tomlinson, will let us into some of the secrets of the trade.

In his talk, “Stained Glass – A Mystery Trade”, Ian will explain how glass is made, how the windows are held together and constructed, show us both old  and modern tools, and the methods used in medieval times.

The meeting will take place on Tuesday, 14 June 2016 at 7.30pm in Bishopthorpe Methodist Church Hall.

All are welcome.  Members of the Group: free.  Non-members: £3.50 to include light refreshments.

On Sunday, 5th June, a commemoration event for conscientious objectors of the First World War from the York area, will be held at Bishopthorpe Church Hall.  This is an unusual event for Bishopthorpe and you may wonder why York Quakers are commemorating the men here, in the village.

One of the men, Alfred Martlew, drowned and his body fetched up on the river bank at Bishopthorpe below the Palace grounds.  He had been employed as a clerk with Rowntrees and had applied to the York Tribunal for exemption from military service.  His application was rejected and he was imprisoned at Richmond Castle with 15 other conscientious objectors; famously known as the Richmond 16.  In May 1916, the men were posted to France, where they again refused to obey orders.  Tried by court martial, they were sentenced to death, but this was commuted to 10 years hard labour.  Back in England, they were sent to various prisons.

In 1917, Alfred returned to York, it is thought, to see his fiancé, Annie Leeman.  They met and Alfred told her that he intended giving himself up as he was a deserter.  He stated that he had not received proper treatment from the Home Office and appeared to be extremely depressed.  Miss Leeman last saw Alfred on 4th July.  His body, which was caught in the willows on the river bank, was discovered on the 11th July by James Holt, a gardener at Bishopthorpe Palace.

The body was conveyed to The Woodman Inn and the Inquest was held at the Reading Room (now the Village Hall).  The Coroner, in summing up, said that the probability was that the deceased had taken his life, but there was no positive evidence.  There was no evidence of foul play or that the deceased had accidentally fallen into the river.  The jury returned a verdict of “Found Drowned.”

Alfred Martlew, who was originally from Gainsborough in Lincolnshire, was buried on the 13th July 1917 in St. Andrew’s Churchyard, Bishopthorpe. He was aged 23 years.  His place of burial is marked by a headstone; probably erected by his parents as their names are carved on the stone with their son’s.

The Quakers’ commemoration on Sunday, 5th June 2016, at Bishopthorpe Church Hall, is from 2.30pm to 4.30pm.  There will be a talk about York’s conscientious objectors and a display.  A gathering is to be held at Alfred’s graveside.

An article about the area’s conscientious objectors can be found on The Press website here: http://www.yorkpress.co.uk/news/14527036.Service_to_be_held_in_memory_of_York_conscientious_objectors__100_years_on/

The report of the Coroner’s Inquest can be found in The Yorkshire Herald, Friday, 13 July 1917, p2, col. 3.  A transcription can be seen at the Bishopthorpe Community Archive in Bishopthorpe Village Hall, Main Street.  Open Mondays 2.30pm – 5.00pm.