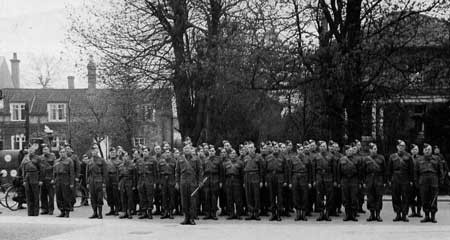 Seventy years ago, on 3rd September 1939, Prime Minister Neville Chamberlain broadcast to the nation.  It was a momentous yet typically downbeat statement that, apparently, most of the British nation listened to, having been alerted that it would contain the news that it did.

Mr. Chamberlain revealed that he had not received a response to his demand that the German Government should withdraw their troops from Poland, by the deadline of eleven o’ clock a.m. “I have to tell you”, he continued, “that no such undertaking has been received, and that consequently this country is at war with Germany.”

To commemorate this historic anniversary, villagers’ reminiscences and photographs showing how they buckled down to life on the Home Front, can be seen in Bishopthorpe Library.

The Local History Group delved into the Bishopthorpe Community Archive for photographs and memories from recorded interviews.  Many of them reveal the indefatigable spirit and sense of humour which carried the villagers through six years of war.

“We were listening to the radio in the study.  My sisters had been to Westmorland, where my aunts and my grandmother lived and they’d met my eldest uncle. And he was one of those chaps who was either up in the attacks or down in the dumps, you know. He was very mercurial. And he got very depressed over this news and my sisters came back and they said, ‘Uncle Cecil says we must sue to Hitler for the best terms we can get.’ And my mother said, ‘What on earth is Cecil thinking of? We shall fight to the death.’

I always remember her saying that. She was going to hit him with a hockey stick, I think.”

In Bishopthorpe, like everywhere else, men, women and children on the Home Front adapted to a different way of life; they put up with shortages; saved for the war effort; “dug for victory”; “got on with everything” and “did their bit”.  They joined organisations such as the Home Guard, the Civil Defence and the National Fire Service; they raised money for Spitfires and Hurricanes; they knitted much-needed socks for seamen. 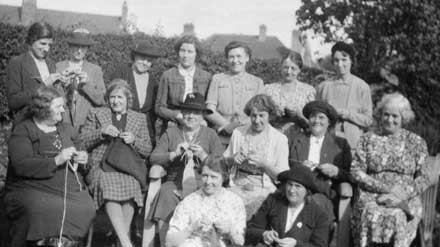 If you would like to see more, then visit Bishopthorpe Library where our display will be on show until 4 September.

Thank you Linda for your most interesting articles. Carol Woollcombe was my Sunday School teacher over fifty years ago. I well remember her class and playing with plasticine and sitting in small round backed wooden chairs in the vestry on Sunday mornings.