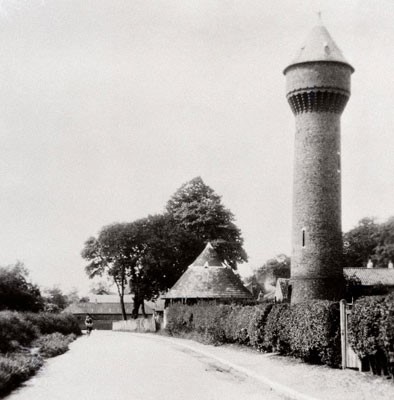 The water tower and pump house in Acaster Lane looking towards Main Street.  This photograph was re-discovered earlier in 2006 by Mrs. Barbara Suffield.  It was taken by her mother, Mrs. Nicholson, c1940.

Dr. William Thomson, the 86th Archbishop of York, had hardly set foot in Bishopthorpe when the appearance of the village dramatically changed.  Only months following his enthronement in February 1863, the Archbishop removed the antiquated machinery which pumped water into the Palace from the murky depths of the Ouse, and built a water tower and pump house in Acaster Lane.  This, presumably, drew water from an underground spring which was probably somewhat cleaner than the supply his predecessors had used.

On his arrival in Bishopthorpe, the new Archbishop would soon have become aware of the pitiful state of his drinking water.  Three miles up river, the increasing numbers of York citizens were discharging raw sewage straight into the Ouse; not to mention the detritus from slaughterhouses, pigsties and dung heaps.   The situation had been eased in 1846 when the York New Water Works Company built a filtration works at Acomb Landing.  This meant that, happily for the inhabitants of York, their domestic water supply was extracted upstream of the city’s foul outlets.   However, downstream, this was not the case with the Archbishop’s household.

It was to be many years before further utility improvements materialised in the city and, in turn, Bishopthorpe.  In 1880, the village worthies became impatient at the situation and sought to interest the directors of York New Water Works Company in laying a mains water supply.  The response to a letter from Bishopthorpe vicar Rev. Hudson was positive, but a guaranteed rental of £80 per annum was demanded.  The idea was dropped and another fifteen years passed before the Company expanded its plans to include Bishopthorpe.

Three years later, in 1898, water was finally laid on to supply the whole village; the water tower and horse-driven pump house in Acaster Lane at last became redundant.  Archbishop Thomson had died in 1890, but would surely have welcomed such developments. Succeeding Archbishops did not find further use for the buildings, neither were they unduly bothered about what became of them.  The two buildings, therefore, remained in the village landscape resembling misplaced follies.

Pigeons moved into the tower and made nests which were raided by young boys keen to take eggs and enjoy a furtive drag or two on a cigarette. These activities came to a head in 1935 when ten-year-old Alwyn Seward fell from the tower.  He died from his injuries in hospital the following day.  Despite this tragic event, the tower remained in place. 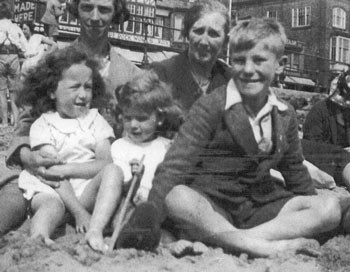 Alwyn Seward, who was tragically killed after falling from the tower, is seen here on a trip to Scarborough only months before the accident occurred in 1935.  Photograph: With thanks to Mrs. Audrey Bastard.

During World War II, the Home Guard found the tower a useful place in which to store ammunition, but years of neglect had taken their toll.  Villagers were concerned about loose tiles being a danger to pedestrians.  The Ecclesiastical Commissioners now owned the two structures and W. J. Simpson, the well-known local builder, carried out repairs on their behalf as were required to make it safe.  Following the war, Mr. Simpson, who was chairman of the Parish Council, came up with an idea on how to recycle the circular, tiled roof of the pump house; after all, building materials were in short supply at the time.

The Parish Council had been negotiating with the West Yorkshire Road Car Company over the installation of a bus shelter.  Mr. Simpson offered to reconstruct the pump house roof on to the circular pinfold wall, which was situated at the junction of Main Street and Copmanthorpe Lane, thus converting it into the much-needed shelter.  He measured both structures and knew they would be a perfect match.  However, the West Yorkshire County Council turned down the proposal telling Mr. Simpson that the shelter would constitute an encroachment and obstruct the visibility across the road.  The pinfold was eventually used as a bus stop, but the villagers went without protection from the weather. 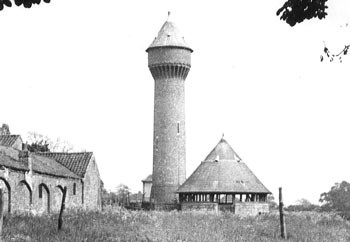 A view of the water tower and pump house looking south.  Note that part of the first semi-detached house in Acaster Lane can be seen immediately to the left of the tower.  Photograph taken by Mrs. May Hill, c1935.

Following this episode, the Archbishop’s water tower and pump house were demolished in July 1946.  The late Robin Hill, a former resident, recorded in his diary that the water tower was “…felled by having a hole blown out of the base on the E. side”.  Apparently, the cap on top of the roof shot into the field on the opposite side of the Lane.  Mr. Hill further remarked that village opinion was divided as to whether the structures were demolished out of necessity – in order to build houses – or, that it was an act of vandalism.

Would Archbishop Thomson have minded?  Being a man interested in science and all things mechanical, he would probably have knocked the tower down much sooner and moved on.

The memories of Mrs. Audrey Bastard, sister of Alwyn Seward.